Source: Morningstar Direct. NPI is the National Council of Real Estate Investment Fiduciaries Property Index. You can not invest in an index. Index data does not reflect the deduction of fees and other expenses which would reduce returns. Past performance is not a guarantee of future returns.

Stable Income Throughout Its History

Source: Morningstar Direct. NPI is the National Council of Real Estate Investment Fiduciaries Property Index. You can not invest in an index. Index data does not reflect the deduction of fees and other expenses which would reduce returns. The Income Return measures that portion of total return attributable to each NPI property’s net operating income, or NOI. Net operating income is gross rental income plus any other income less operating expenses – utilities, maintenance, taxes, property management, insurance, etc. The NOI return is computed by dividing NOI by the average daily investment for each quarter. The formula takes into consideration any capital improvements and/or any partial sales that occurred during the quarter. Past performance is not a guarantee of future returns.

Historically High Risk-Adjusted Returns (As Measured By The Sharpe Ratio) 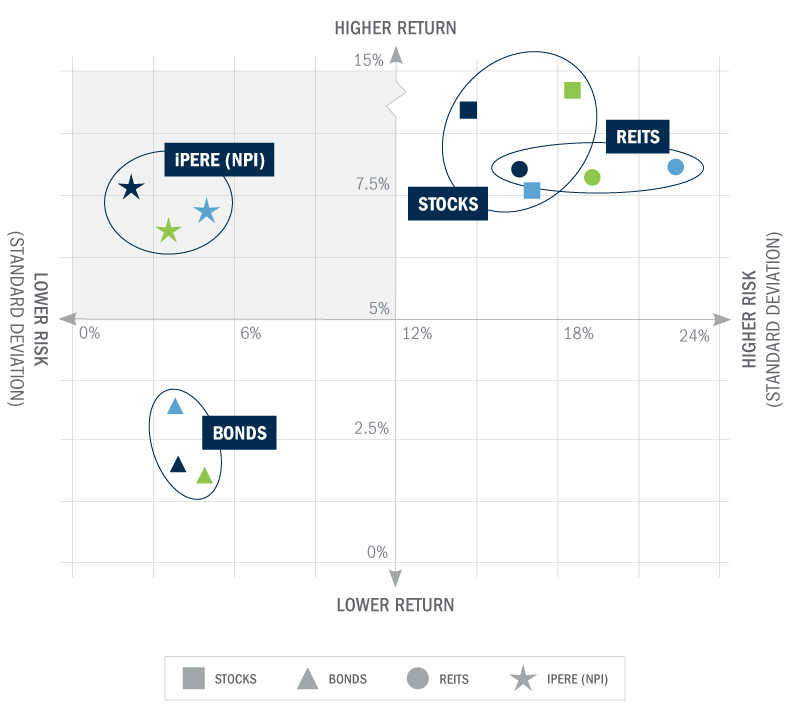 NPI total annualized returns have exceeded those of bonds for the trailing 20 years and the NPI income component has averaged a higher rate than the average dividend yields of these other major asset classes.

Note: Darker colored bars indicate total return, comprised of income or yield and appreciation. Lighter colored bars indicate the portion that is strictly income or yield. Total return and yield are distinct investment characteristics. The concept of yield is important as is signifies periodic (annual) interest or dividends received as opposed to total return which calculates a total overall investment value assuming interest or dividends are reinvested.

Sources from 2002-2021: Morningstar Direct, NPI total return is the National Council of Real Estate Investment Fiduciaries Property Index (NPI) and the average yield is derived from the income component of the of the NPI, Stocks: S&P 500; Bonds: Bloomberg U.S. Aggregate Bond Index, Listed REITs: FTSE/NAREIT All equities Index. 10 year US Treasury Bond yields are used for bond yields. Asset returns are shown for informational purposes only. You can not invest in an index. Index data does not reflect the deduction of fees and other expenses which would reduce returns. Past performance is not a guarantee of future returns.

Periods of 3 consecutive quarters or more when 12-month inflation was greater than 4% versus NCREIF Property Index Performance.

Source: NCREIF, Bureau of Labor Statistics, Bluerock. Quarters where trailing 12 month inflation (represented by CPI) was greater than 4% were identified as “inflationary quarters” and sets of 3 or more inflationary quarters were included in the analysis. Private real estate performance represented by the NCREIF Property Index (NPI). Inflationary periods longer than 12 months were annualized (Q4 78-Q4 82 and Q3 88-Q2 91). The Consumer Price Index (CPI) is a measure of the average change over time in the prices paid by urban consumers for a market basket of consumer goods and services. Past performance is not a guarantee of future returns.

Source: Morningstar Direct. See back page for Definitions of Economic Crises. Stocks: S&P 500. You can not invest in an index. Index data does not reflect the deduction of fees and other expenses which would reduce returns. NPI is the National Council of Real Estate Investment Fiduciaries Property Index. Past performance is not a guarantee of future returns.

Source: Morningstar Direct. See back page for Definitions of Economic Crises. You can not invest in an index. Index data does not reflect the deduction of fees and other expenses which would reduce returns. NPI is the National Council of Real Estate Investment Fiduciaries Property Index. Each bar represents one quarter of total return. Total Return is computed by adding the Income Return and the Capital Value Return. An NPI quarter-to-quarter return provides an estimate of the quarterly Internal Rate of Return (IRR) as if a property was purchased at the beginning of the quarter and sold at the end of the quarter with the investor receiving all net cash flow (NOI-Cap X) during the quarter. The NPI rate of return formula assumes: NOI is received at the end of each month during the quarter and capital expenditures occur at mid-quarter, partial sales occur at mid-quarter. A partial sale is the sale of a portion of the property such as excess land. Past performance is not a guarantee of future returns.

Source: Morningstar Direct You cannot invest directly in an index and unmanaged indices do not reflect fees, expenses or sales charges. The referenced returns are shown for general market comparisons. Total return is expressed in percentage terms, determined by taking the change in price, reinvesting, if applicable, all income and capital gains distributions during the period, and dividing by the starting price. Past performance is not a guarantee of future results.

MSCI US REIT Index (Public REITs): A free float-adjusted market capitalization weighted index comprised of equity REITs that are included in the MSCI US Investable Market 2500 Index, with the exception of specialty equity REITs that do not generate a majority of their revenue and income from real estate rental and leasing operations. The index represents approximately 85% of the US REIT universe (www.msci.com). Returns shown are for informational purposes and do not reflect those of the Fund. You cannot invest directly in an index and unmanaged indices do not reflect fees, expenses or sales charges. Risks include rising interest rates or other economic factors that may negatively affect the value of the underlying real estate.

S&P 500: An index of 500 stocks chosen for market size, liquidity and industry grouping, among other factors. The S&P 500 is designed to be a leading indicator of U.S. equities and is meant to reflect the risk/return characteristics of the large cap universe (Investopedia).

Standard Deviation: The standard deviation of the daily percentage change in an investment. Standard deviation shows how much variation from the average exists with a larger number indicating the data points are more spread out over a larger range of values.

iPERE/NCREIF Property Index (NPI): Institutional private equity real estate (iPERE) can be described as high-quality commercial properties that are usually congregated in large investment portfolios managed professionally on behalf of third-party owners or beneficiaries. The leading benchmark index for iPERE is the National Council of Real Estate Investment Fiduciaries Price Index (NPI) which represents a collection of 9,700+ institutional properties representing all major commercial property types within the U.S. The NPI is a quarterly time series composite total rate of return measure of investment performance of a very large pool of individual commercial real estate properties acquired in the private market for investment purposes only. All properties in the NPI have been acquired, at least in part, on behalf of tax-exempt institutional investors – the great majority being pension funds. As such, all properties are held in a fiduciary environment.

Total Return: Expressed in percentage terms, Morningstar’s calculation of total return is determined by taking the change in price, reinvesting, if applicable, all income and capital gains distributions during the period, and dividing by the starting price. The NPI Total Return includes appreciation (or depreciation), realized capital gain (or loss) and income. It is computed by adding the Income return and Capital Appreciation return on a quarterly basis. Income Return measures the portion of total return attributable to each property’s net operating income or NOI. It is computed by dividing NOI by the average quarterly investment for the quarter. Capital Appreciation Return measures the change in market value adjusted for any capital improvements or partial sales for the quarter.

Early 1980s Recession: The early 1980s recession in the United States began in July 1981 and ended in November 1982. One cause was the Federal Reserve’s contractionary monetary policy, which sought to rein in the high inflation. In the wake of the 1973 oil crisis and the 1979 energy crisis, stagflation began to afflict the economy.

S&L Crisis: The savings and loan crisis of the 1980s and 1990s (commonly dubbed the S&L crisis) was the failure of 1,043 out of the 3,234 savings and loan associations in the United States from 1986 to 1995: the Federal Savings and Loan Insurance Corporation (FSLIC) closed or otherwise resolved 296 institutions from 1986 to 1989 and the Resolution Trust Corporation (RTC) closed or otherwise resolved 747 institutions from 1989 to 1995. In an effort to take advantage of the real estate boom (outstanding U.S. mortgage loans: 1976 $700 billion; 1980 $1.2 trillion) and high interest rates of the late 1970s and early 1980s, many S&Ls lent far more money than was prudent, and to ventures which many S&Ls were not qualified to assess, especially regarding commercial real estate. L. William Seidman, former chairman of both the Federal Deposit Insurance Corporation (FDIC) and the Resolution Trust Corporation, stated, “The banking problems of the ‘80s and ‘90s came primarily, but not exclusively, from unsound real estate lending”.

“Dot-com” Bust: The dot-com bubble (also known as the dot-com boom, the dot-com crash, the Y2K crash, the Y2K bubble, the tech bubble, the Internet bubble, the dot-com collapse, and the information technology bubble) was a historic economic bubble and period of excessive speculation that occurred roughly from 1997 to 2001, a period of extreme growth in the usage and adaptation of the Internet by businesses and consumers. During this period, many Internet-based companies, commonly referred to as dot-coms, were founded, many of which failed. During 2000–2002, the bubble burst. Some companies, such as Pets.com and Webvan, failed completely and shut down. Others, such as Cisco, whose stock declined by 86%, and Qualcomm, lost a large portion of their market capitalization but survived, and some companies, such as eBay and Amazon.com, later recovered and surpassed their stock price peaks during the bubble.

Global Financial Crisis/Great Recession: The financial crisis of 2007–2008, also known as the global financial crisis and the 2008 financial crisis, is considered by many economists to have been the worst financial crisis since the Great Depression of the 1930s. It began in 2007 with a crisis in the subprime mortgage market in the US, and developed into a full-blown international banking crisis with the collapse of the investment bank Lehman Brothers on September 15, 2008. Excessive risk-taking by banks such as Lehman Brothers helped to magnify the financial impact globally. Massive bail-outs of financial institutions and other palliative monetary and fiscal policies were employed to prevent a possible collapse of the world financial system. The crisis was nonetheless followed by a global economic downturn, the Great Recession. The Great Recession (2007–2012) was a period of general economic decline observed in world markets during the late 2000s and early 2010s. The scale and timing of the recession varied from country to country. In terms of overall impact, the International Monetary Fund concluded that it was the worst global recession since the 1930s (the Great Depression). The causes of the recession largely originated in the United States, particularly related to the real-estate market, though choices made by other nations contributed as well. According to the U.S. National Bureau of Economic Research (the official arbiter of U.S. recessions) the recession, as experienced in that country, began in December 2007 and ended in June 2009, thus extending over 19 months.